“We forget about music sometimes, but then we come back to it, and it yields fresh pleasure and insight, along with a beautiful, bittersweet cadence of our past merging with the present moment.”
Brad Mehldau

Soundscapes: These sound-pictures came about from a desire for a new way of constructing and articulating through sound. The basic building-blocks of time, pulse, pitch and timbre form a musical language in which relationships between its component parts are free and spacious. This reflects a contemporary need for harmony in its broadest sense – the ecology between us as humans and in our relationship with the natural world and the planet.

The pieces have an abstract, ambient quality. In some ways they are like film music. There are also echoes of the intertwining threads of Medieval polyphony and the sound-world of electroacoustic music.

All the sounds are recorded live, and then put together and edited on the computer. Some sounds are instrumental or vocal, others from nature or the urban landscape. There is a sense of architectural structure which emerges during the process. Putting them together is like creating a sonic sculpture, which ‘hangs’ in time.

I have been working in collaboration with visual artists in projects exploring different themes through colour, texture and structure. Collaborative work is a rich creative exchange and allows for thinking outside the box – see current projects. 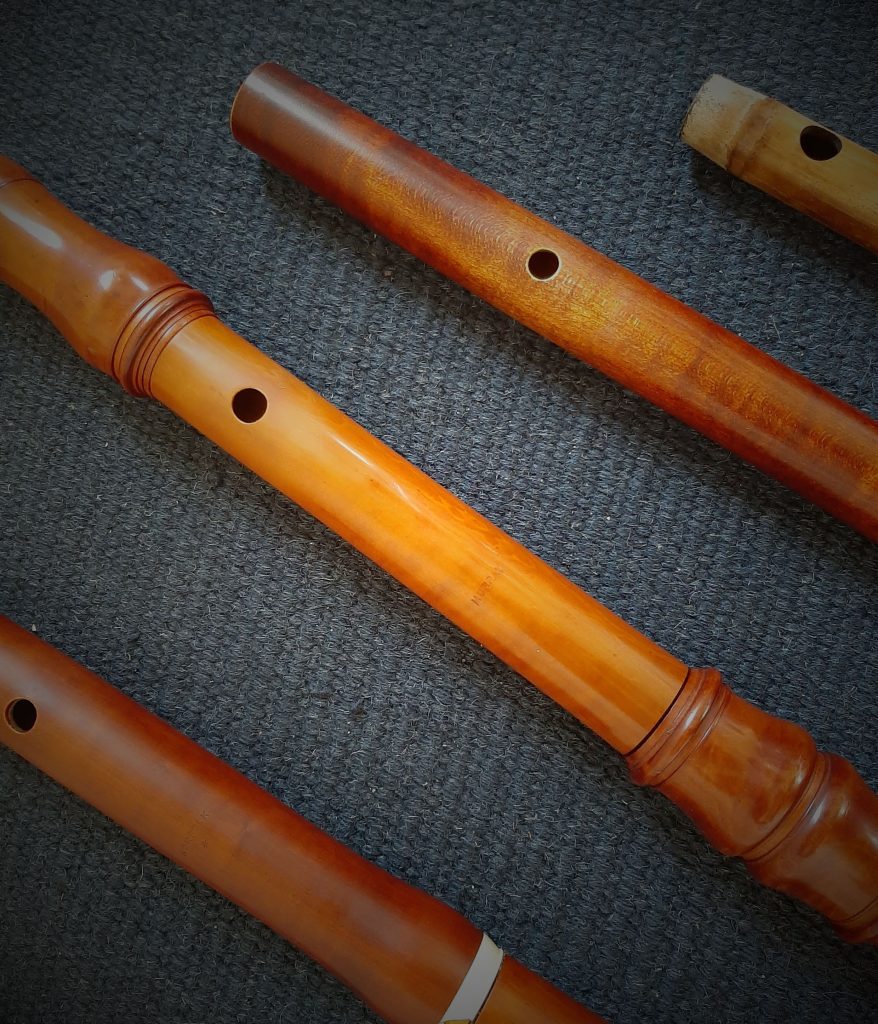 The yoga of sound and music:

In yoga, sound and the sense of hearing are linked to the element of space – the space through which the sound-waves travel.
The more deeply we listen – ‘tuning in’, the more our actions in the world come from a deeper, more congruent place. In yoga this ultimate truth is ṛtam. Living is then neither a rehearsal nor a performance, but the song of our deepest truth.

I had a classical training, studying music at Oxford, at the Royal College of Music in London specialising in early music performance (Baroque flute) and then in Belfast where I did an MA in 20th Century music. In the 1990’s and 2000’s I worked playing early and contemporary chamber music, as well as with creative educational projects for children.

Working with natural materials through period performance, and, at the other end of the spectrum, in electroacoustic music, came from an attraction to timbre, and to sound for its own sake. Timbre, or colouring, is like the ‘taste’ of sound  – the quality of rasa in music.

Through the practice of yoga I began to feel the ‘music’ of my own physiology, and the harmony of the body and breath. This enabled me to begin to find a language in sound which is stripped to its bare essentials – time, rhythm, pitch and timbre. This more intuitive process creates a direct communication and sense of sharing, rather than performing.

I am grateful to Tim Jones, of The Nature of Sound, to Paul Lambillion, and to the yoga teaching of Peter Hersnack, for helping me to get out of my own way and so learning to listen.

Creating soundscapes for specific spaces such as therapy rooms, or other spaces where sound is used to create an atmosphere in an otherwise quiet or silent room. I can visit your space to tune into it, and then create sounds which reflect the quality of the space and what it is used for. Like placing a plant or hanging a painting, these Sounds for Healing Spaces provide support for therapeutic work. Please contact me if you would like to know more.

I have been improvising with flutes in various contexts – in yoga classes and gatherings as well as formal and events with other musicians, visual artists and writers. Responding live to the setting and to the work of other artists involves listening attentively and fine-tuning the relationship with people, places and ambience.

Workshops with yoga and sound explore what sound (vibration and resonance) and musical language can teach us about communicating, particularly the interface between our inner (private) space and our public persona. We work in a variety of ways with resonance, pulse and rhythm, combining individual sounds into counterpoint (interweaving lines) and harmony. Some of this work involves movement and creative approach to yoga postures – some is seated. All of it helps to develop a capacity for listening deeply and connecting to something essential inside.

This website uses cookies to improve your experience while you navigate through the website. Out of these cookies, the cookies that are categorized as necessary are stored on your browser as they are essential for the working of basic functionalities of the website. We also use third-party cookies that help us analyze and understand how you use this website. These cookies will be stored in your browser only with your consent. You also have the option to opt-out of these cookies. But opting out of some of these cookies may have an effect on your browsing experience.
Necessary Always Enabled
Necessary cookies are absolutely essential for the website to function properly. This category only includes cookies that ensures basic functionalities and security features of the website. These cookies do not store any personal information.
Non-necessary
Any cookies that may not be particularly necessary for the website to function and is used specifically to collect user personal data via analytics, ads, other embedded contents are termed as non-necessary cookies. It is mandatory to procure user consent prior to running these cookies on your website.
SAVE & ACCEPT